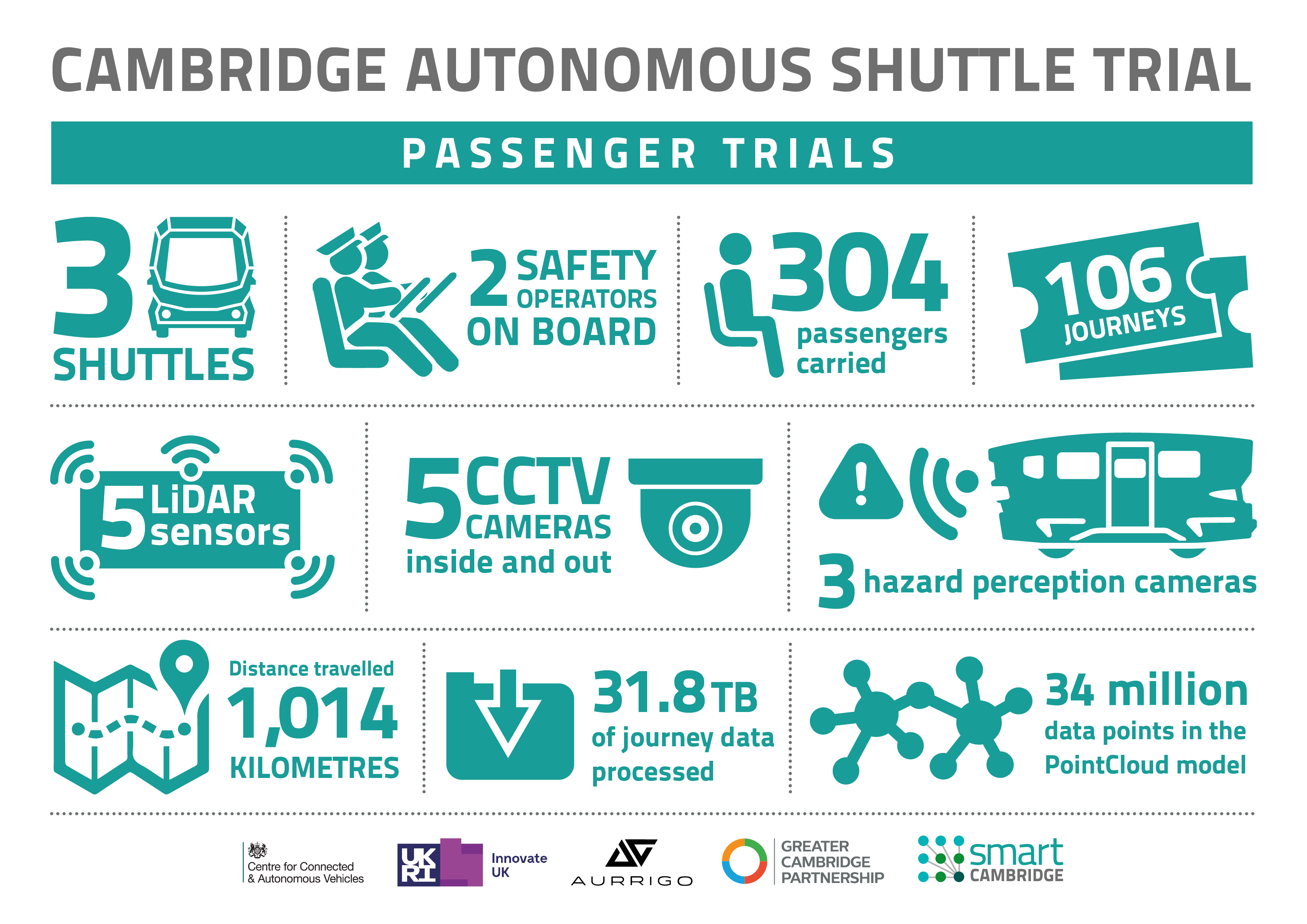 More than 300 passengers hopped on board the Aurrigo shuttles to take fully autonomous journeys around the University of Cambridge’s West of Cambridge site this summer – including transport minister Rachel Maclean MP.

The self-driving shuttles were operating from Madingley Park & Ride throughout June to investigate the possibility of autonomous vehicles being used as part of a public transport service in the future.

This was the first time custom-built autonomous vehicles have shared the road with other traffic in the UK whilst carrying passengers. Each shuttle was crewed by two onboard safety operators who were able to regain manual control of the vehicle immediately at any time if required.

Surveys were sent to all passengers who had booked a ride online to understand how they felt about their trip in the vehicle and how they might feel about an autonomous service in the future. Over 97 per cent of people who filled out the survey said they would get on one again without hesitation.

The project was led by the Greater Cambridge Partnership (GCP), Smart Cambridge and engineering firm Aurrigo to look at how autonomous technology can be used on the public transport network. It is backed by Innovate UK and the Centre for Connected and Autonomous Vehicles.

It could pave the way for a range of autonomous services to provide on-demand public transport for workers at large employment sites – such as the Cambridge Biomedical Campus and West Cambridge – and potentially for people enjoying an evening in the city in the future.

New technology could form a vital component of the future of GCP’s high-quality public transport routes that will transform travel into Cambridge for thousands of people every day.

Cllr Neil Gough, Chair of the GCP’s Executive Board, said: “We’re looking for innovative, future-proof transport solutions and this technology could prove to be a vital component in the GCP’s high-quality public transport routes and the wider transport network in the future.

“This would help to transform the way thousands of people travel in and around Greater Cambridge every day to help cut congestion, improve air quality and give people a real alternative to travelling by car.”

David Keene, Chief Executive Officer of Aurrigo, said: “Cambridge has been the ideal location to move our autonomous technology forward and we have gained valuable experience of testing our driverless shuttles in a real-world setting, mixing with live traffic.

“This was the first time a trial of this nature was completed and was only possible due to the foresight and collaboration of partners Greater Cambridge Partnership and Smart Cambridge. Together, we have learned so much that we can use to inform future developments in autonomous vehicles and the way the public interact with them.”

The GCP is delivering the area’s £500m city deal with Government to support sustainable growth for the country by investing in public transport infrastructure, skills, and housing.

This project is part of wider plans by the GCP to help the area work sustainably by understanding how smart technology can be used in real-world scenarios to cut congestion and improve public transport.

The findings of these trials will support research into potential driverless shuttle services, to link the city’s other research campuses with the rail stations and Park & Ride sites and help shape the future of mobility in Greater Cambridge and beyond.

Self-driving vehicles could make it easier for people to travel on the UK’s future public transport network by offering safer, greener and more reliable transport services.

For more information visit the Autonomous Shuttle project page on the GCP website.